Alzheimer’s disease (AD) is the most common form of dementia in the elderly and this complex disorder is associated with environmental as well as genetic factors. Early-onset AD (EOAD) and late-onset AD (LOAD, more common) are major identified types of AD. The genetics of EOAD is extensively understood, with three gene variants such as APP, PSEN1, and PSEN2 leading to the disease. Some common alleles, including APOE, are effectively associated with LOAD identified, but the genetics of LOAD is not clear to date. It has been accounted that about 5-10% of EOAD patients can be explained through mutations in the three familiar genes of EOAD. The APOE ε4 allele augmented the severity of EOAD risk in carriers, and the APOE ε4 allele was considered as a hallmark of EOAD. A great number of EOAD patients, who are not genetically explained, indicate that it is not possible to identify disease-triggering genes yet. Although several genes have been identified by using the technology of next-generation sequencing in EOAD families, including SORL1, TYROBP, and NOTCH3. A number of TYROBP variants are identified through exome sequencing in EOAD patients and these TYROBP variants may increase the pathogenesis of EOAD. The existence of the ε4 allele is responsible for increasing the severity of EOAD. However, several ε4 allele carriers propose the presence of other LOAD genetic as well as environmental risk factors that are not identified yet. It is urgent to find out missing genetics of EOAD and LOAD etiology to discover new potential genetic facets which will assist in understanding the pathological mechanism of AD. These investigations should contribute to developing a new therapeutic candidate for alleviating, reversing and preventing AD. This article, based on current knowledge, represents the overview of the susceptible genes of EOAD, and LOAD. Next, we represent the probable molecular mechanism that might elucidate the genetic etiology of AD and highlight the role of massively parallel sequencing technologies for novel gene discoveries. 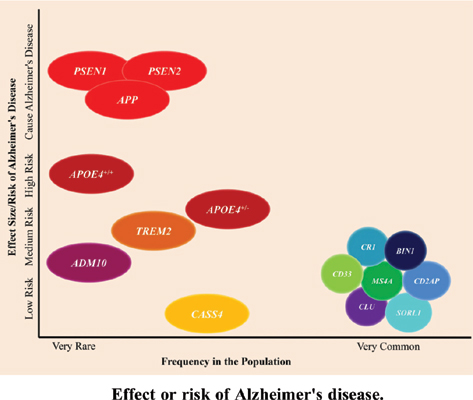